There is the most important ceremony conducted by the Japanese Emperor called “Shihouhai” or “Yohouhai” on January 1st.  It means “the prayer to the four directions” or “the prayer for the world (yo).”  Other ceremonies at the Imperial Palace can be conducted by others but this particular one can be only conducted by the Emperor himself. The contents of this prayer have been a well kept secret for a long time.  However, in the recent years, the words used during this ceremony have been revealed to the public.

Before dawn on the New Year’s day out in the cold, the Emperor calls in the divinities and pray for the people.

Historically, the Emperors of Japan felt personally responsible for what happened in the country including natural disasters.  The 56th Emperor Seiwa (AD 850-881) has stated that “Disasters do not occur by coincidence. It is all because of the lack of virtue in myself” after a flood occurred in Kumamoto.

Even when someone was planning to kill the Emperor, he still thought it was his responsibility.  The Emperor Meiji has created the following poem after Kotoku Shusui (1871-1911) , a socialist and an anarchist was arrested for planning to assassinate the Emperor himself.

If there was a sin committed by him,  Amatsu God of Heaven,  please punish myself.  What my people did is my fault since he is one of my own children.  – Emperor Meiji

Although these stories did not usually make newspaper headlines,  it has been a common knowledge of the Japanese people that the Emperor’s traditional role is to pray for the peace and happiness of the people.

The concept of “the people as the nation’s treasure” existed for millennia in Japan. The word “Oomitakara” was used to mean “people” in the ancient Japan.  In the first Japanese formal historical document called “Nihonshoki”  which was completed in AD 720,  the Emperor Nintoku’s words are recorded.  It states the following:

The reason for the Heavenly Person (Emperor) to be standing is for “Oomitakara,” the People.

The Japanese word “takara” generally means “treasure.”  According to the dictionay “Genkai,” the word “ta” in “takara” is derived from “ta” as in “rice field.”  The word “kara” generally means “from” but it also means “people” or “companions” as in the words such as “harakara” and  “yakara.”  “Harakara” consists of the word hara (womb) and kara (out of, people) .  The word “yakara” traditionally meant “people that belong to the same tribe.”  Therefore, the word “takara” also meant “people at the rice field” or “companions at the field” in the old days.

The concept of “human rights” was traditionally expressed in the word, “Oomitakara” in Japan.  This was not only Emperor Nintoku’s personal credo, but it was considered something that was passed down from his ancestors as the basic principle.  The following phrase is found in book 3 of Nihonshoki  which is included in the declaration of founding the county (Kenkoku no Mikotonori) by the first Emperor Jimmu.

The Emperor’s work is to benefit “Oomitakara,” the people.

Prince Hisahito who is the third in line for the Chrysanthemum throne is already growing rice at the Imperial Palace in Tokyo at the tender age of 10 and keeping the tradition which dates back more than 2600 years since the first Emperor Jimmu was throned in AD 660. 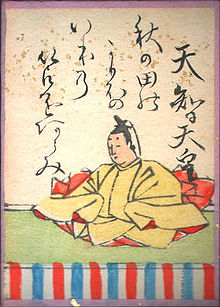 Over 1300 years ago, Emperor Tenchi (AD 626-672) also known as Prince Nakano Oenooji or Amatsumikoto / Sakiwakenomikoto has written a famous Japanese poem which is in “Ogura Hyakunin Isshu,”  a classical Japanese anthology by one hundred poets. This poem was the first and the most important poem in the anthology.

At the humble hut made of the rice stalks in the autumn rice field,  my sleeves are collecting the dews while I weave.

It reveals that not only the Emperor himself was weaving a mat or some form of a craft using rice stalks but he was also involved in the process of growing rice just as the current Emperor is.

The Japanese people are considered to be very hardworking people. People have been telling each other for at least a few thousand years that we must work hard because even the Emperor himself works in the field. In Kojiki, even the divine figures or the “gods” work in the rice field.

The Japanese Emperor’s lineage has lasted this long because they were originally the rice growing peaceful, hardworking vegetarians who were constantly praying.  Since they were considered spiritual figures in the ancient times who were called Tenshi-sama (Child of the God or Heavenly Child) or Ookimi (the Great one), the Emperor has been always respected.  There was no need to have a “revolution” and kill the Emperor in Japan because they have been respected for their hard work and self-sacrifice as well as their divine lineage.The Japanese Emperor’s family is considered to be the direct descendants of Izanagi and Izanami who are said to have created the islands of Japan in the Japanese classics, Kojiki.

Growing rice since 6000 years ago

According to the current research,  the tradition of growing rice dates back to the beginning of “Jyomon Era” which is approximately 6000 years ago.  According to the report by Kyodo Press in 2005, the professors from Okayama Rika University and Notre Dame Seishin Women’s University have uncovered the evidence of ancient rice called “plant opals” from “Hikozaki Kaizuka” in Okayama prefecture which dates back 6000 years ago.

In the recent years, more evidence have been uncovered to prove that the practice of growing rice started before Yayoi Era (BC 300 – AD300).  It used to be believed that the technology of growing rice was brought to Japan from the Chinese continent. Several archaeological findings disprove this theory now. The plant opals of rice were also found from the ancient porcelain piece found in Mikamo Himesasahara in Okayama which dates back 4500 years.

One of the most important ceremonies conducted by the Japanese Emperor at the Imperial Palace is a “Thanksgiving” ritual called “Niinamesai” which is conducted on November 23rd.  In this ceremony, he eats the newly harvested rice of that year along with other crops for the first time using an oak leaf and a bamboo pincet called “Oribashi.”  Oribashi have widely used in the Japanese Jinja or shrines in the old days. This utensil is unique to Japan and it suggests that the original Japanese people did not use chopsticks as in China or in the Korean peninsula.

This ceremony which has been passed down for thousands of years also suggest how their ancestors were eating rice in the old days. It suggests that people were originally eating without a bowl and chopsticks.  It means that the tradition of growing rice and eating rice came BEFORE they started making porcelain bowls and using chopsticks.

The fact that this ceremony is still preserved in the Imperial ceremony suggests that they considered it important enough to maintain this humble way to eat along with the tradition to give gratitude for the new crops. Understanding how long the Japanese Emperor and the people have been growing rice and eating rice is the key in understanding the Japanese culture.